Reasons not to upgrade OSX to El Capitan

This ongoing rant should be considered as 'work in progress' - I am adding all the miserable nasties as they come crawling to the surface. 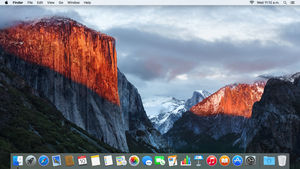 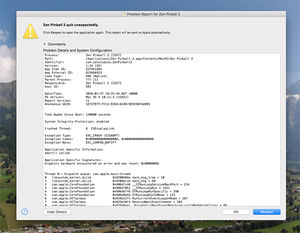 I'm always wary of 'improvements' to my beloved Apple's operating system. I might be unique, but I just want a system that is easy to use, clean and tidy and that does not force me to do things 'their' way. I've been working with computers for 38 years and I know exactly what I want from my systems.

The fact that the underlying software is Unix which has been around before Microsoft existed. It is reliable, battle hardened and basically Open Source. I understand Unix well so I can also dig about under the bonnet [hood].

The upgrade went well and was completed, as promised, within 30 minutes on my 27" iMac [1 TB Fusion drive - 8 GB ram], however on my 21" iMac [1TB SATA drive - 8GB ram] it took 5 hours to complete, with the screen constantly displaying 30 minutes to go. If this happens, just leave it running and come back in the morning. If you switch it off mid-upgrade you risk bricking it.

Since the 'upgrade', I have not found a single thing to my benefit or any notable improvements.

Constantly pestering me to change my browser to Safari

Every time I use Safari it treats me like a fuckwit

Every time I start Safari, I get a pester message asking me to change my default browser to Safari. Thanks Apple, if I wanted to do that, I would have done it. You are becoming more like Microsoft everyday and I am beginning to hate you Apple.

One more problem caused by this train-wreck of an upgrade. Once color tags are assigned they can no longer be removed from an item in the normal manner as described here. The only way I have found is to completely delete the tag. Hopeless because it means all of the files you've tagged lose the color tag!

The system now crashes on a daily basis. Spinning colour wheel and nothing functions. I have to switch it off by holding the power button for 5 seconds. Well done Apple.

I am not alone 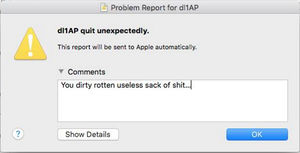 A friend in the Audio-Visual industry who has used Apple products for teh last 27 years posted this rant on Facebook recently:

After 27 years you'd have thought I'd have learnt... All I need to do is print one page of A4 with all the details of tomorrow's job on. I was going to use the same printer I've been using with this laptop for over a year, but now it won't work. Why? Well obviously because I've upgraded my OS to "El - "what do you mean you could do that last week" - Capitan" from Yo-"everything worked quite well" - semite. Thanks Apple, I mean really, you shouldn't have... I even waited until the 3rd release (update) of El Capitan - just to make sure every that was broked was fixed. But no... <sigh>. Maybe it's time for Apple to finally come clean and reveal that Bill Gates has been the majority shareholder for the last 5 years and change their name (back) to Microsoft.

I really hope Apple start to analyse all of the crash logs sent from my machine and find a solution to this hopeless version of an operating system. My iMac hangs almost once a day. The only way to bring it back to life is to hold the power switch down for 5 seconds and then re-boot. Often it needs a safe boot first (hold shift down whilst rebooting), then a normal reboot before it leaves the white 'apple' screen. This OS is becoming more like a Windoze operating system. APPLE -SORT YOUR SOFTWARE OUT!