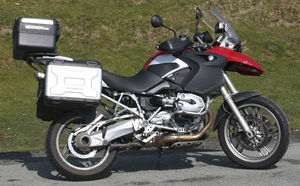 I fitted a third-party High-intensity discharge lamps (HID lamps) in my GS 1200 shortly after I first got it in 2004. It is one of the best improvements I've added to this bike. I did buy a replacement lamp kit for main and dipped beam, but soon found that for the purpose of flashing another motorist, the HID lights were rather poor. They take a finite time to get to heat so don't illuminate immediately. Also the bumping motion of the motorbike means that a main beam looks very similar to the dipped beam. I found it far better to leave the main beam as an incandescent bulb and the dipped beam as an HID. You may not want to do this if you do a lot of night riding in dark lanes!

The advantages of the HID lamps were immediate. Everyone gets out of your way as the extremely bright light is almost painful in a rear view mirror. On a motorway no one ever hogs the outside lane in front of me! They are brilliant, in every way.

HID lights do not start (light up) until the engine is running so if they don't start the first time the engine starts, you need to turn the ignition off and start the bike again. This causes a problem, which probably does not happen with HID lights as a BMW factory fitted option; when the condition of the bike battery is poor and the output voltage is low, the HID lights don't start the first time. If I charge the battery, the lights start first time again. However, this is a Good Thing. After a month of always failing to light on first start, the bike left me stranded one morning as the battery was so bad that the bike would not start.

If the HID lights don't come on when you first start the bike, your battery probably needs to be replaced.

With the HID lights and also with LED side lights, on my GS1200 factory fitted with incandescent lights, the onboard diagnostics shows an amber warning triangle as these lights do not draw as much current as a normal lamp so the system thinks the bulb is blown. I've asked several BMW technicians and they say the bike firmware cannot be reprogrammed to resolve this. That's a bit of a drag, but the benefit of the better lighting far outweighs the annoyance of the warning light. One wag at a unnamed BMW garage said "put a sticker of the warning light! if it bothers you."