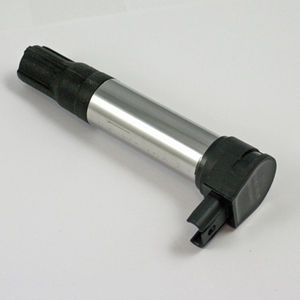 Side stick coil for most BMW models - MotorWorks

My 2005 SG1200 has had a very rough tick-over for about four months. It seemed to tick-over quite slowly and the bike would shake badly. I didn't do anything about it as the bike ran fine once it was revving and it only stalled on me a few times when ticking over.

Yesterday though, things took a turn for the worse. The engine barely started, cut out a few times and backfired when revved. I certainly wouldn't risk using it in that condition.

All four spark plugs plugs had been changed about 5 months ago and the sudden deterioration did not suggest faulty plugs to me. Like most modern engines, the GS does not use a remote HT coil, it is part of the spark plug 'cap' and is known as a stick coil. I removed one of the side stick coils and inspected it more closely. It was completely dry but looked as though it might have been tracking from inside and across the rubber. When peeling back the rubber, the ceramic insulation, that had probably once been white was a nasty dirty brown. I was fairly convinced that the fault was HT related, which can only mean a problem with the stick coil(s). I've save a fortune over the last eleven years so I thought it would be worth taking a chance that the coils could be the problem. I quick Google showed that this is not an uncommon problem. I ordered 2 side stick coils from MotorWords and four spark-plugs from Amazon (all details below).

They arrived today, I replaced the plugs and both the side stick coils and the bike started immediately. No rough running and a notably higher tick-over speed.

A short test ride proved everything was working fine. I am a happy boy!

I would not recommend peeling back the rubber insulation just to inspect the stick coil as it seems to be sealed and you may well damage a perfectly good coil assembly.

From Googling it seems that the side stick coils are the ones that fail, especially when problems are at low revs. The bottom plugs seem to have more effect at higher revs.

Be extremely careful when unplugging the LT plug from the stick coils. It is very easy to snap the locating tag and just as easy to break the LT plug completely. Treat it as though it were made of glass!

MotorWorks can supply cheaper used stick coils, but as use, heat and age seems to regularly destroy them, I would only go for new units.