Dyson CD16 Handheld vacuum- cuts out after a few seconds 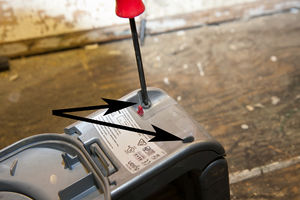 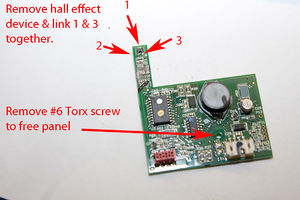 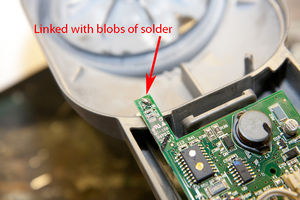 Hall-effect device removed and linked out with blobs of solder

The Dyson DC16 Root 6 portable vacuum cleaner intermittently cuts out after a few seconds use, the red light comes on (indicating a fault mode?).

It's as if the battery is flat, but this happens even with the battery fully charged. It is intermittent, sometimes it works fine.

It appears that the hall-effect device [a transistor that detects changes in a magnetic field] is intermittently failing so the cleaner logic thinks the filter has not been fitted and goes into fault mode.

This is a field-fix, not a repair.

Remove the faulty hall-effect device and permanently bridge the device so the unit thinks the filter is fitted, even if it's not.

If you want to replace the device it is an Infineon low-power Hall-Effect switch, TLE4913, available from most electronics component suppliers. A quick Google should find you one easily.

Do not even attempt to repair this yourself if you are not comfortable removing surface-mounted semi-conductors and attempting soldering on a sub-miniature scale. However, if the unit was like ours, unusable, you probably have nothing to lose.

Oddly the same symptoms seem to occur if the unit needs emptying and it cannot 'cyclone' - I'm not certain how that can be, but emptying it appears to solve the problem!

Sometimes a similar fault can occur if the filters are badly blocked. Replace or wash out the filter to prove the fault. Allow the filters to dry properly before using the unit properly or it will clog up.

Visitors have reported similar symptoms being caused by a faulty battery. Check by substitution if possible as the replacement batteries are very expensive. The output of a fully charged battery should be around 21.5 volts.

This came to me from one of our Belgian visitors:

There can be another problem on the Dyson DC16. In the battery pack is a small temperature control. If the battery become too hot, it will cut the power. I remove that part and soldered the 2 wires together. The Dyson wasn't charge anymore (the red light flash). I bought a new battery pack and all is OK now. There is nothing indicated on the micro temp.control! I measured the voltage from each battery and that is OK, but I think the temperature control must be fault.