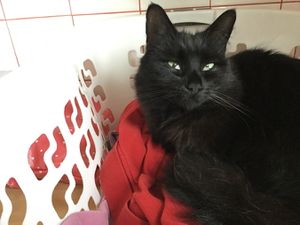 Sharon at the onset of Haw's Syndrome

We live in rural Norfolk, UK and have four cats that all have a very active outdoor lives and spend a lot of their time outdoors.

Six weeks ago, we noticed that one of our cats had rather strange eyes; it was as though they were not properly open - the pupils partly covered by white inner-eyelids. Other than the visual effect of her eyes there were no other apparent symptoms. As a precautionary measure, we took her to our local vets: The Hollies - Downham Market and their vet, James, examined her. He came back to outside to us with the diagnosis. [this was during Covid 19 Lockdown so we were not present for the examination).

He explained that it was likely she had probably got Haw's Syndrome, a fairly uncommon, but not serious neurological symptom of a gastric disorder, sometimes from a worm burden that is often picked up by cats that spend a good deal of time outdoors. He explained that the symptoms should abate within four weeks, to four months of the onset. If they stayed longer than this, we shoudl bring her back for further examination.

Within two or three weeks, all the other three cats had developed the same 'funny white eyes'. No other symptoms were seen and apart form the strange appearance, they were four happy and apparently healthy cats. One of the other symptoms of Haw's Syndrome can be diarrhoea, but as they are very active outdoor cats, we had no way of knowing if they were exhibiting these symptoms.

Six weeks after we first noticed the symptoms in Sharon's eyes, they had improved a great deal. You could still see the third eyelid but it retracted fairly quickly once she opened her eyes and most of the time the white eyelid was hardly visible. A few weeks later and the other cats symptoms had greatly improved too.

I will update this page with their progress.

The obvious symptoms are that the white 'third eyelid' does not retract and looks as though it is partially covering the pupil [in both eyes in our cases]. How's Syndromw does not appear to be contagious between cats but if they spend time in similar surroundings they are also likely to be infected. There were no ill effects or other symptoms and he thought the eyelid symptoms could last from between four weeks to four months.

There is plenty of information on the web and it's very similar to what we were told by James the vet at The Hollies. (although Google seems to show the two as similar, this is not the same as Horner's syndrome, also an eye disorder) Google Search for Haw's Syndrowe