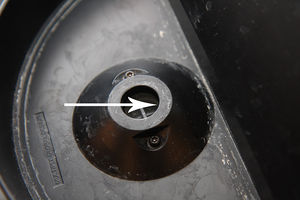 My Krups coffee maker developed a fault yesterday and started to leak, almost emptying the reservoir all over the worktop. Being mechanically-minded, I had it stripped down in a jiffy, despite the presence of anti-tamper torx screws. However, for anyone with a similar problem, this can be quickly repaired without undoing a single screw (I discovered once it was a heap of parts!).

We have hard water here and limescale (calcium carbonate) builds up quickly, even from cold water. A layer of limescale had built up around the rubber seal on the coffee maker (arrowed in picture), and also around the tube/stem of the reservoir that mates with it. A quick wipe around with a cloth has cured the problem and could have been done without disassembling anything!

Prevention is better than cure

Use only filtered water or bottled water and this problem will never happen. I guarantee that you will also be amazed at the quality of the coffee when using soft water. Try a taste test if you're sceptical. You'll also notice froth where before there was none.

Seven months later the seal failed completely. If removed and inspected it is now permanently misshapen.

I managed to find a replacement seal from Belstar Electrics - (less than £5.00 incl vat and Post and packaging - UK Oct 2011)

Images of the reservoir seal mechanism. 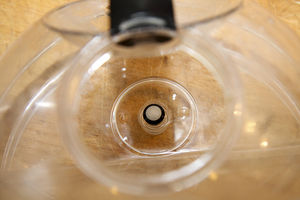 Reservoir seal mech (from base)

Great piece of advice! However, in my case (I own a Circolo) i had to unscrew the plastic with Torx 10 and clean the seal. It had some wet calc around it and that created space between the walls. That caused the leaking.

Takes too long to make a cup of coffee

If the time it takes to make a cup of coffee in your Dolce Gusto coffee machine has increased over time then it is probably time to descale your coffee machine, especially if you live in an area that has lots of calcium in the water (a hard water area). I've found that Oust works well and does not taint the coffee. Do ensure that you flush it through completely two or three times after descaling.

If the machine is really badly scaled up, then you might find it just sits there humming with no coffee coming out at all. This is because the pump does not create enough pressure to pop the seal at the bottom of the coffee capsule. Descaling the machine will probably solve this.

If you've had this problem then you should try making your coffee with filtered water or even bottled water. I can tell the difference easily, by sight and by taste. It is much frothier, with a slight foam to it and it tastes 'fresher'. Do try it, you will be amazed at the difference. 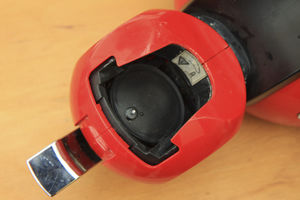 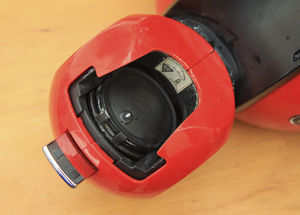 I have a later version of the Nescafé Dolce Gusto coffee machine which has developed another leaking problem. This time from around the coffee pod itself. It is much easier to fix and only needs a good descaling to solve the problem.

What happens is that the rubber seal that squeezes into the coffee pod holder when you press the lever down to pierce the pod becomes furred up with limescale and no longer makes a good seal. Boiling hot fresh water leaks out into the coffee cup while you make the coffee, which normally means that it goes all over your worktop again.

Remove the water reservoir, invert the coffee machine, push the pod piercing mechanism down to expose the ridged rubber seal and brush with a good descaling solution. Leave for 10 minutes (or whatever the descaling manufacturer recommends) then remove any remaining limescale with a small brush or cotton bud then rinse well with fresh water. To ensure the coffee machine is properly flushed out after this operation, I would place a bowl under the steam nozzle and run a full reservoir through the system, on hot, with no pod inserted.