Magic mouse unusable because it scrolls too much

I love my iMac and especially love the Magic Mouse, it's better than any mouse I've used previously on any PC. One of the best features is the ability to scroll by wiping your finger across the surface of the mouse. It's very intuitive and works especially well as the mouse has no 'buttons' to impede this function. Nonetheless there is one problem with this scrolling function. It renders some games and apps unusable because the scrolling action can be too fast and uncontrollable.

Two examples of this problem are especially frustrating for me.

The brilliant game, Minecraft has an inventory bar with 8 'slots'. This is accessed by scrolling the mouse. However, if you are not careful, the slightest accidental touch on the mouse sends the scrolling action wild and you find yourself fighting with a flower instead of a golden sword!

The spreadsheet in OpenOffice, Open Office Calc is another great free application for Windows and Apple PCs. The problem with the Magic Mouse and this app is similar to the Minecraft problem, the slightest touch on the top of the mouse sends the active cell scrolling off to the other end of the spreadsheet. Oddly any attempt by trying to reverse this effect by scrolling the other way only speeds up the action. It only stops once you reach the furthest cell to the right; AMJ on my system! It then takes forever to get back to cell A1.

Until the third party vendors modify their software to prevent these problems, the only way to make them usable again is to either disable the inertia scrolling effect or completely disable scrolling on the Magic Mouse using the Mac OSX option settings.

For some strange reason, known only to Apple, this setting is not under Mouse as you would expect, it's under Accessibility. Here's how you get there: 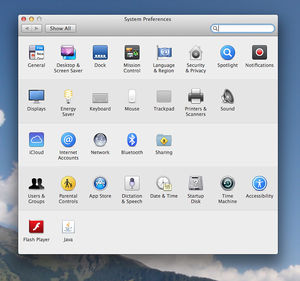 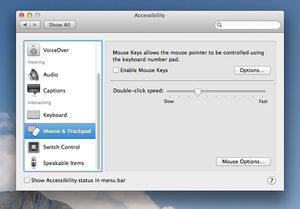 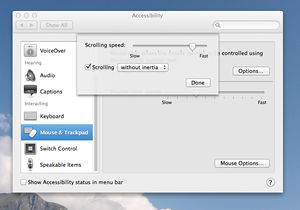