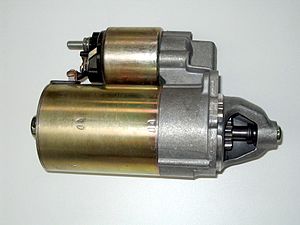 I needed a starter motor for a Fiat Ducato 2 litre petrol van. The unit I wanted was a Valeo D9E61 so I searched the Internet and came up with Mr Auto.

If anyone is considering buying a starter motor Mr Auto have a read of my experience. I'll leave it up to you to decide if you want to use them.

I ordered the part by giving my registration number. It showed a part that I cross referenced with other sites and seemed to be correct. It showed the starter motor to be in stock so seeing that it would be despatched the next day and arrive the day after I ordered the motor.

5 days later and the part had not arrived. I rang their (Indian?) call center and was eventually told there had been a delay and the part would arrive soon. I could not get any tracking information.

A week later the part arrived - shipped from Belgium. From the complaints I've seen on their feedback system, this is a common occurrence.

The part was boxed and brand new. I fitted it, the engine turned over but did not start. After much troubleshooting I eventually discovered the problem. The motor turned anti-clockwise, spinning my engine backwards! A fairly tricky problem to find for most people I would imagine.

When I looked at the invoice, it showed the part I had ordered had been replaced by an equivalent.

I called their (Indian?) call centre the next day to get some resolution and told the 'helper' that the motor they had supplied did not work correctly because it turned the wrong way. I was told that this was because I not had it fitted by a mechanic, but because I had fitted it myself! I could not get her to understand the concept of the motor going backwards. She then told me the only way to get the correct part was for me to contact the manufacturers and get an original part number - so much for their 'system'.

I gave here the number from the original starter - Value D9E61 and she told me she did not recognise the number and again repeated that I need to contact the manufacturer for the original part number. When I finished the call I did a quick search for Valeo D9E61 and found lots of sites which listed it and equivalent motors. an example of one of these sites. There are lots of equivalents on this page. Unsurprisingly the one Mr Auto supplied was not amongst them.

Trying to arrange the return and the line went dead and I could on get a number fault message when trying to call them back. If I try to leave (bad) feedback on their system, it tells me that I've left it too long to give feedback. This is 2 days after it arrived by the way.

I've now decided to get the original reconditioned by my local breakers yard and I'll wave goodbye to the £30.