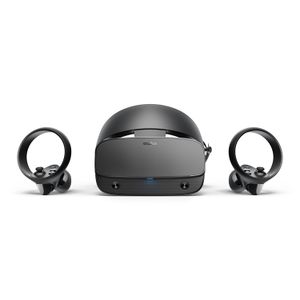 After weeks of problems and errors with my Oculus Rift S VR headset, I have finally solved the problem!

The problems were many and various: Headset would run sometimes, not others. The Oculus software would show the Red X, say it was connected but showed fault and suggested the Oculus software needed rebooting, which never solved the problem. Unplugging and re-plugging the USB connector sometime fixed it, other times not. Often, halfway through a game it Steam would show the headset had been put into 'Safe Mode'. Basically it was unusable.

I then discovered after many tests, that if I unplugged all USB devices (including the USB keyboard dongle, USB mouse dongle, USB wifi dongle, etc) the Oculus Rift S VR headset would work without problems!

Note: My system had multiple USB 3 ports, but they were all run from a single USB controller.

Add a USB 3 extension card that has extra power taken from the LP4 or SATA power connector. This provides the extra power the the Rift S headset requires.

There were more expensive options, as below, but the Inateck was cheaper and has solved the problem!

Since adding the extra self-powered USB card, all my headset problems have disappeared.